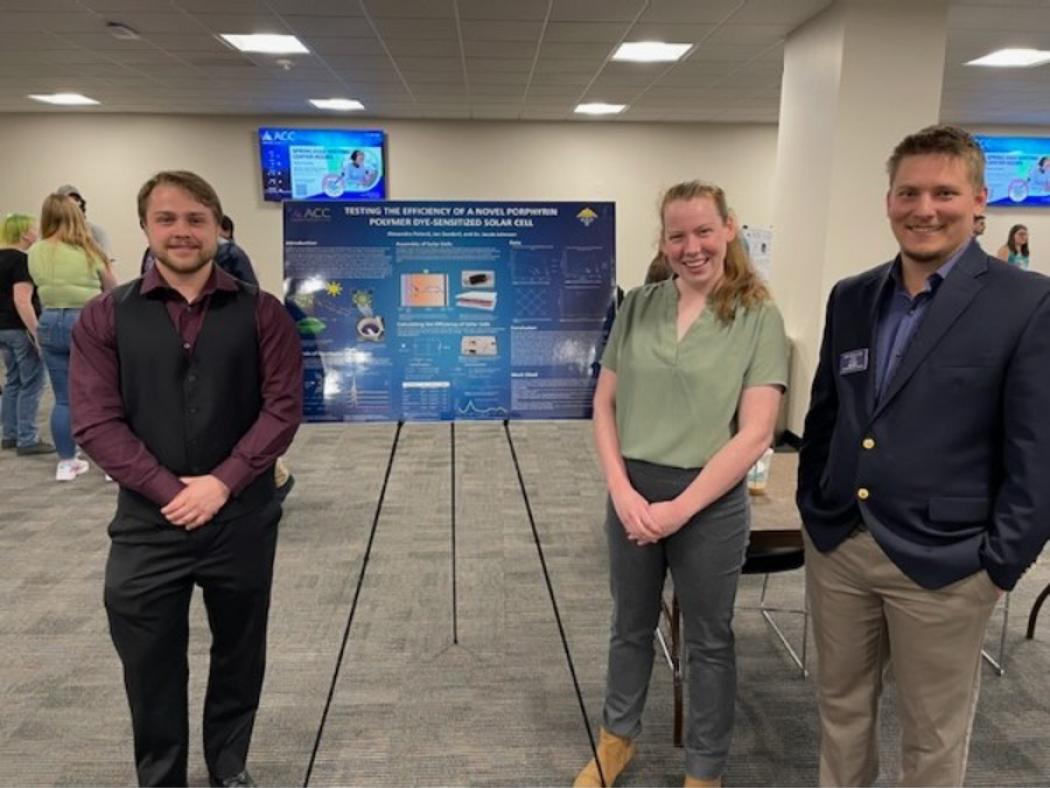 On April 29, 2022, students from the ACC Chemistry Research Scholars program participated in Arapahoe Community College’s 2nd annual research symposium. Researchers presented three distinct projects culminating their work from the past year.  These projects are highlighted below.

Dye-Sensitized Solar Cells (DSSCs) are a novel method of renewable energy generation that utilize light absorption in an organic dye to generate electricity. Porphyrin, an organic molecule reminiscent of chlorophyll B, efficiently absorbs a large spectrum of visible light. This attribute makes porphyrin based DSSCs about 13% more efficient than traditional DSSCs1. This year’s project is a continuation of a previous project and compared the efficiency of a porphyrin polymer to several monomers utilized in a DSSC. Researchers synthesized a porphyrin polymer and compared its performance in a Dye-Sensitized Solar Cell to several different organic monomers. Because of the porphyrin polymer’s resistance to photodegradation, it proved to be more efficient than any of the other compounds tested in the previous project. Due to the polymer’s ability to absorb more wavelengths within the visible light spectrum whilst resisting degradation, the efficiency of the solar cell increased by over 1% (in comparison to the monomers previously tested). This research demonstrates the efficacy of porphyrin polymers and points toward a future where a modified porphyrin polymer could be used to improve the efficiency of DSSCs; one day, perhaps this could be implemented in a widespread renewable energy grid.

Photo-oxidizers are photocatalysts that drive chemical photo-oxidation reactions. The prefix “photo” means light, thus, a photocatalyst is a catalyst that increases the rate of reaction for a light-based chemical reaction. Photocatalytic reactions proceed after the absorption of light causes the photoexcitation of a catalyst. In this experiment, researchers used several synthesized porphyrin polymers to catalyze the selective photo-oxidation of sulfides to sulfoxides. Sulfides are a waste product of petroleum manufacturing; this compound can be utilized to generate sulfoxides (found in many pharmaceutical compounds). Reclamation of petroleum waste is integral to the preservation of the environment. Additionally, since the porphyrin polymer that researchers synthesized is recyclable, it can be used multiple times to facilitate this reaction of turning a waste product into a viable compound.

Out of the polymers tested, the synthesized gallium porphyrin polymer proved to be the most efficient in visible light absorption, rendering it the most efficient photocatalyst. This is a promising discovery as this recyclable catalyst resists photodegradation and could be a much more environmentally friendly alternative to heavy metal catalysts.