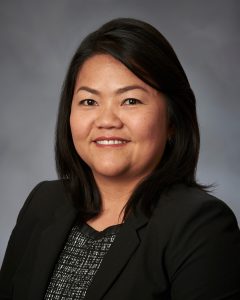 Earlier this spring, Arapahoe Community College student Leah Porter was selected as one of 15 nationwide Guistwhite Scholars by Phi Theta Kappa International Honor Society. Recipients are chosen based on academic achievement, leadership accomplishments and engagement in PTK programs. It proved to be just one of a multitude of accolades that the Malaysian native would garner during a decorated 2016-17 academic year at ACC.

Porter initially arrived in Colorado in 2001, but spent the majority of the ensuing six years traveling in and out of the country before returning to Denver as a permanent U.S. resident in 2007. She has lived in Israel, Singapore, Czech Republic (Prague) and Puerto Rico, and is fluent in five languages.

However, when she enrolled at ACC in 2014, her written English and math (logarithms) competencies were not yet at the college level. Language barriers were frustrating and rendered prerequisite courses challenging. Porter, however, persevered through the adversity and was encouraged to apply for the ACC Sales Club Scholarship by Dr. Jim Boespflug while taking his Business Law class. Much to her surprise, she was selected as the recipient. “Winning the scholarship really woke me up,” explained Porter. “It invigorated me, and I realized that I wanted more from my college experience. In fact, it motivated me to apply for an officer position in ACC’s Sigma Phi Chapter of PTK.”

She has become accustomed to overcoming obstacles, but none may be greater than the cultural adversity she has – and continues – to contend with. Porter, however, knew the path she wanted to travel, and began a new journey three years ago. Her goal: an associate degree and “cerebral” career. “There is a socioeconomic demographic of women in Malaysia who are discouraged from advancing their intellect,” expressed Porter. “There is, unfortunately, a stigma that exists within my family because of the choices I’ve made to pursue my education.”

The President of Sigma Phi, Porter received Coca-Cola Community College Academic Team Gold Scholar recognition earlier this spring. She is ACC Student Government’s representative on the State Student Advisory Committee (SSAC), as well as the student representative on the State Board for Community Colleges and Occupational Education (SBCCOE). Porter earned Distinguished Officer acclaim at this year’s PTK Colorado/Wyoming Spring Regional Convention and was named to the PTK All-Colorado Academic Team in March.

In 2016, she attended the PTK Honors Institute, served as Sigma Phi Vice President (Honors in Action Project), attended the Emily Griffith Symposium and founded ACC’s first student book club. Porter has also served on the President’s Student Advisory Council and Diversity Committee. “My experience at ACC has been so valuable. The integrated, institution-wide support at the College has enabled me to establish not just my educational pathway, but confidence in myself,” said Porter. “The faculty and staff, as well as the opportunities, at ACC are amazing. My educational journey extends beyond just my life. ACC has helped change the lives of my daughters, who now have college aspirations.”

Porter has moved mountains at ACC with great fervor, and she approaches each challenge as an opportunity to expand her horizons. Her global voyages have since subsided, but her academic endeavors are well underway. She has been named ACC’s 2016-17 Student of the Year and will serve as one of three student speakers at the College’s 50th commencement on May 10 when she graduates with her associate degree in Business Administration. Porter, who plans to pursue bachelor’s and master’s degrees, wants to attain a career in higher education, serving as an advocate for aspiring female students both locally and around the world.