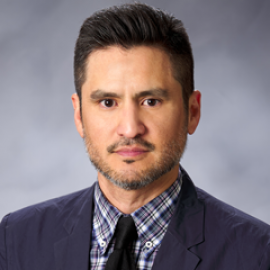 Faculty
Mathematics
he / him / his

Born in Peru, emigrated to the States as a child where I grew up with a brother among the kids of graduate students in Louisiana and Texas.

Houston became my adopted hometown after high school at A&M Consolidated and is where I completed my degrees and began my first of a few careers.

During school, I often worked as a tutor and found it to be enjoyable and stimulating and so it was natural for me to begin an after-school chess program for kids that had to wait for their working parents. I grew to love the instruction and mentorship of it!

Upon completion of my bachelor's in psychology (and with enough math and statistics credits), I entered into the Alternative Certification Program at Houston ISD where I began my career in education by teaching Algebra to inner-city students. I also coached the Varsity Soccer Team, having been persuaded by some neighborhood students who I played pick-up soccer with.

Seeking a greater scholastic challenge, I returned to graduate school and completed my master's in applied mathematics.

After enough graduate credits, I was fortunate to be offered a job as an adjunct for the Houston C.C. system after a spirited conversation with my father's boss. Upon completion of my Master's, I was then offered a position by my esteemed former teacher, mentor and department chair working alongside the remarkable instructors who had once been my own teachers at the very campus where I earned my associate degree, San Jacinto C.C.

My desire to be closer to the outdoors brought me to Denver and good fortune has lead me to Arapahoe and a new exciting phase in my career. I am thrilled to join the team!