Louis Stokes (1925 - 2015) was the first African American in the U.S. House of Representatives, where he served 30 years as the Ohio Congressman. He eventually went on to win a seat on the House Appropriations Committee. Stokes was the son of a widow who cleaned homes for a living.
He and his brother grew up in public housing during their childhood. After serving in a segregated army unit during WWII, Stokes attended college and law school and became a prominent attorney prior to running for office. As both a member and leader of congress, Stokes was a sponsor and
supporter of many bills and resolutions intended to assist disadvantaged populations.

While serving on the House Appropriations Committee, Stokes committed to rectifying the lack of underrepresented minorities in the STEM fields. In 1991, when a program to increase the number of underrepresented STEM degrees was mandated by Congress, Stokes’ colleagues opted to name the initiative the Louis Stokes Alliances for Minority Participation (LSAMP) in his honor. Since the inception of LSAMP, over 500,000 baccalaureate degrees have been awarded to STEM majors.

Benefits of Becoming an LSAMP Scholar

The Metro Denver STEM Alliance offers LSAMP Scholars a community of peers, faculty, and staff committed to supporting students’ excellence in academics, personal and leadership development, and career preparation. While programming may differ across colleges, LSAMP Scholars will benefit from a variety of programs and services, including but not limited to the following:

Students will be required to fulfill the following requirements each semester in order to maintain eligibility for participation in the LSAMP program.

Apply to be an LSAMP Scholar 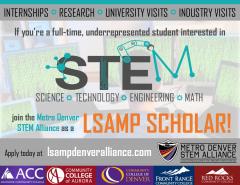 During Student Engagement Week, student clubs and organizations will host